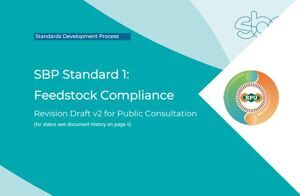 The Russian Pellet Union (RPU), in order to protect its business reputation and exclude a discriminatory approach to Russian pellet producers, interacts with the holders of the leading European certification systems and closely monitors the procedures for amending existing certification standards.

In particular, since 2021, the RPU has been actively working with the holders of the SBP certification system, directed against a radical change in the SBP standards.

Description of the problem

SBP is in the final stage of the revision process of its certification standards. The standards have not been updated since they were first launched March 2015.

Just before the second and final stakeholder consultation round started last year, SBP published new draft standards. Only then it became clear that the involved parties had decided to change the whole system. The main change concerned the cancellation of the possibility of basing SBP claims on approved Sustainable Forest Management certification claims, like FSC. There is no reference to FSC anymore in the suggested draft SBP standards.

The new draft SBP standard № 2 demands from all biomass producers that they would develop own Supply Base Evaluations (SBEs) on basis of risk assessments for all the 38 legality and sustainability indicators in SBP’s Standard № 1, and implement management systems to mitigate the risks.

The draft standard also demands all biomass producers to employ a competent evaluation team (the participants would need to have proven knowledge and experience in evaluating supply bases and supply chains against SBP Standard № 1). All biomass producers are demanded to start consultation rounds with relevant stakeholders on their SBEs, including the evaluation of their own risk monitoring and mitigating procedures.

It was clear that this change would pass without nearly any Russian company taking notice about it. Nobody reacted and SBP had no representatives of the Russian pellet market in its commissions and work groups, working on the revision.

The RPU invited SBP to participate in its webinar in May 2021, but at that time SBP still had not decided on its new approach. End of October 2021, at the webinar RPU organised together with the European Pellet Council, SBP did present its new approach it had finally decided on.

3rd of November 2021, after analysing the draft SBP standards, the RPU sent an elaborate complaint, substantiated with several kinds of arguments (attached), on the approach SBP chose for. This complaint was sent within the second and final stakeholder consultation period.

No reaction followed, and after a few phone calls it seemed the decision had already been made; no changes would be possible anymore.

RPU, however, kept insisting in participation in the relevant work group on revising SBP standard № 2, and in the end our certification specialist was granted the opportunity to give a presentation a meeting of the work group on the 19th of January 2022. In a power point presentation he explained the disadvantages and possible consequences regarding the chosen approach, not in last degree for SBP itself (attached).

Keeping a system in which biomass producers can work on basis of approved Sustainable Forest Management systems makes more sense, and is more efficient. Our certification specialist suggested that any possible gaps in the individual forestry certification systems (regarding SBP’s sustainability requirements) could best be addressed in addition to the work done by the approved systems.

After the presentation, the initial arguments why the new approach was considered absolutely necessary were discussed. The arguments were apparently related to the process of becoming RED II approved, and certain requirements of a new accreditation organisation SBP has chosen to cooperate with in the future. However after reconsidering the arguments, the involved people established that the anticipated problems could also be solved without cancelling the approach of working with the approved Sustainable Forest Management certification systems.

Most SBP work groups on the revision of the standards have finished their work, and have submitted their reports to the Technical Committee of SBP. Our presentation would also be passed on to the Committee.

Within SBP, the staff has now become convinced of the advantages of maintaining the approach of working with the approved Sustainable Forest Management certification systems (FSC, PEFC, and SFI).

Within the SBP commissions is active, for example, the Pellet Association of Canada. This association is very successful in representing the interests of their members, not only within SBP.

The new SBP standards are expected to be ready in the second quarter of 2022.

SBP will also nominate our specialist as a possible successor of a member of the Technical Committee, as soon as such a position becomes free. A better representation of the interests of Russian certificate holders within SBP is considered important.

SBP has an employee which speaks Russian. He is now appointed as our contact person. He will keep us informed on the latest developments, and participate in our events.

11 March 2022, the RPU will host a webinar were SBP and other relevant certification systems (SURE, ENplus, and DINplus) will give an update on their new certification standards and progress in practise. SBP will not only inform on the latest developments regarding the revision process, but also on its new (optional) Instruction Document on RED II compliance.

There is a high chance that we will succeed in maintaining the system of approved certification systems after all. This chance is even higher regarding the production of wood pellets made from wood residues. The cooperation with SBP has improved, we will be in close contact with SBP on its latest developments, and we will be participating in projects on the implementation of its new standards.

The information and materials posted on this website are protected by copyright. The use and citation of materials is possible only with the indication of the authorship of the self-regulating organization of the association Russian Pellet Union and a reference to the source. Otherwise, the association reserves the right to file a claim for judicial protection of copyright with attribution to the infringer all legal costs.