The conference "Sustainable Development: the Climate of the Future". 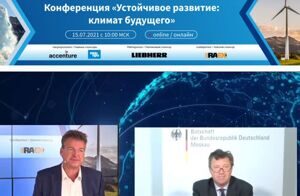 The RPU took part in the conference of the Russian-German Chamber of Commerce and the representative office of the German economy in the Russian Federation "Sustainable Development: the Climate of the Future".

Within the framework of the conference, the issues of actual opportunities and consequences for the Russian Federation and Germany in connection with the adoption of the package of draft laws "EU Green Deal" were considered, the real situation with the implementation and application of sustainable development practices in key sectors of the Russian economy was considered, how "green" financing for attracting additional funds for energy-saving and low-carbon technologies, which include, among other things, pellets.